Last week we started to finalise the list of all the creatures that may be in the game. To this list we’ve removed some old creatures and added new ones. It’s sad to let the old ones go, but I’m excited about all the new variations we’ll have, such as Maverick, a laser shooting horse from the void.

Here are some of the new creatures that will appear in the final game:

Most of this are just variations of existing creatures. For example The Tesseract is an emerald-coloured snow menace, that shoots a healing ray instead of an ice ray. Variations can also include new parts/sprites, so the Red Komodo may have a spined collar, for example. Like with the armour variations, this allows us to add more creature types with less work. Here are some old concepts of snail variations, showing how this recolouring and redrawing might work: 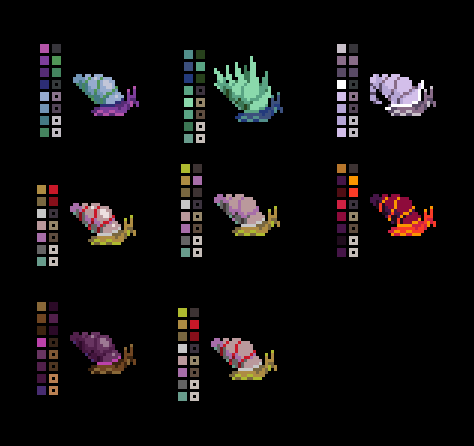 For the volcano level we’ve started to redesign and simplify the demons. Ig and pig have been redesigned and have another friend. Here’s pigg running around.

With most of this stuff Alex will do a bunch of different concepts and then we discuss which one will work best. Here are some concepts for the Forge Wanderer. We decided to go with a variation of the first one, which is simpler and has more clear shapes. 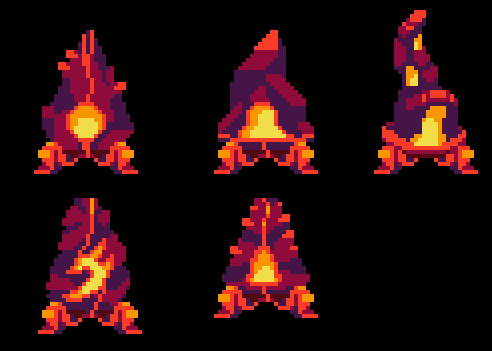 After a discussion with Alex I started to think more about how the game will all fit together, and I’ve come up with a basic model. It revolves around the idea of ‘setups’ and ‘situations’. A situation is an event, conflict, obstacle, reward, or interaction you may encounter, and a setup is a precondition that would help with that. For example:

A tomb in Mesa contains a treasure, but is filled with a horde of cursed hounds. Luckily, the player found a seam of silver ore in the forest and so has a silver helmet, which resists cursing.

The situation there is “cursed creatures” and the setup is “silver in forest”. By creating many of these situations and setups, arranged in a big network, I think we’ll be able to give the game some structure. Situations could also be positive, for example: a locked chest is a situation that requires a key as a setup. Difficulty of the game could be adjusted by associating difficulty levels with situations and setups. A ‘gold ore’ setup could be made to be more difficult by hiding the gold ore in a rare place, or surrounding the ore with aggressive foes. The cursed creatures situation could be made more or less difficulty by reducing the number of cursed creatures.

Until now I’ve been thinking about the game as a whole, trying to imagine how all the resources and items interact with each other in one complete game. But by breaking it down into these small pairs of setup/situation, I can finally start to comprehend how a single game will play out. Sometime soon, within the next two months I’ll start to put this into action.

We are aiming to get the first linux alpha out by the end of this week. @BananaboySam has been working diligently and the main thing we need to figure out is how to effectively package the game so it works across multiple distributions.

He looks like he’s worried about being left behind, like a toddler running to keep up with you and about to cry because your too far ahead. 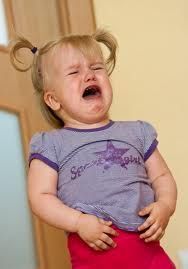 To go a bit further with the set-ups and situations idea. Imagine the situation is that you’ll encounter demons who ignite you with their attacks. One potential set-up for this is to give the player the opportunity to have an iron hat by the time it reaches the enemy. One way to do that is to ensure there’s enough iron ore, a forge and a blacksmith before they get to the volcano area. Each of those things in turn have other requirements, leading all the way back to the starting condition: 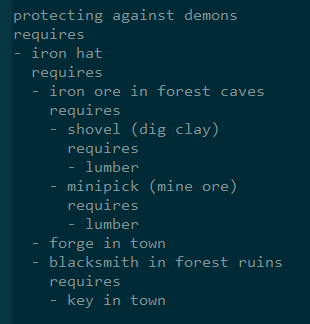 And this is just one situation. This gives you a graph of relationships between things, using rough locations to help order them. E.g., if the only blacksmith in the game is in the forest ruins but it requires a key then you had better not put the key at the end of the game. By adding more and more situations into the game, there’ll be overlap between them. E.g., a blacksmith can also make iron swords, which could be used to overcome a ‘nasty enemy’ situation. So you can re-use the same set-ups over and over.

Things might get tricky if you have incompatible constraints, but because these aren’t hard-constraints, I think you will be able to resolve those things by dropping extra things. E.g., if you’re adding your 10th situation and you realise that the town actually has a tough enemy in, then you could move/duplicate the forge and put it closer to the ‘starting’ area. Not sure if this makes sense but I’m just doing a braindump atm.

Everything about this is excellent. The Linux build is just going to be awesome, the game flow part sounds like an interesting concept that will be good if done well, those creatures look good, especially tha- 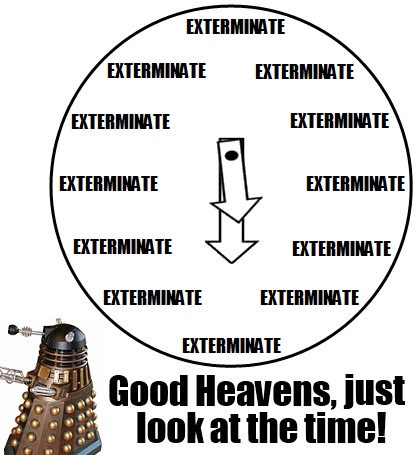 This is a tesseract 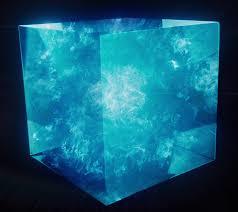 That moment when you didn’t realize only you would ever get the joke. Ever.

Ok I must have missed something

Btw tesseract in mind is just a 4d cube

Must be too dank for me…

Oh wait, I’m a idiot… @ScarecrowAtMidnight you meant it was time to kill them. Yeah, that went over my head for some reason.

Yeah pretty much. In another game I play, Robocraft, damage done to cubes travels along their connection points, so people can redirect damage using sloped cubes. One guy made an abomination called the “Tesseract”, that broke the Meta and caused a lot of frustration. It spread via the CRF, and was a plague for weeks. It was basically unkillable, and was almost single-handedly responsible for the Aeroflak Cannon, which continues to wreck planes unfairly to this day. Whenever I hear that word I just remember them… Linux update: We have it built and running and are just finalising some issues with the packaging. Won’t be out this week, but next week is looking good. Have a happy and safe weekend everyone.